The Best Laid Plans (+ some elevations) at CO Architects, LA 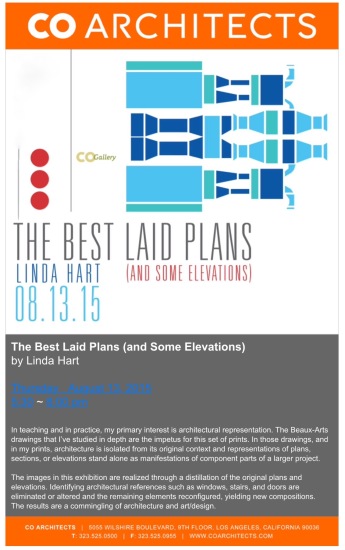 Proposal for a Brick Villa

The plan is the generator… a plan is an austere abstraction.
—Le Corbusier (Toward An Architecture)

Statement
In teaching and in practice, my primary interest is architectural representation. The Beaux-Arts drawings that I’ve studied in depth were the impetus for this set of prints. In those drawings, and in these prints, architecture is devoid of contextual clues  and representations of plans, sections, or elevations stand alone as manifestations of component parts of a larger project.

The plan is the generator for the drawings included in this exhibition. The images are realized through a process of interpretation and distillation of the original plans and elevations. To distance (to varying degrees) the drawings from their architectural roots, identifying elements such as windows, stairs, and doors have been eliminated or altered and the remaining elements emphasized and reconfigured, yielding new compositions.  These compositions, abstractions of abstractions, represent explorations of pure form and color—a commingling of architecture and art/design.

Biography
Linda Hart earned a BA in Art History and a Ph.D. in Architecture from UCLA. The subject of her dissertation, architectural representation, concentrates on a set of drawings made by architecture students at the French and American Academies in Rome. The question of how to translate a three-dimensional subject (architecture) into a two-dimensional format (drawing, film, etc.) remains her primary interest. Linda has taught extensively at several architecture schools, primarily at SCI-Arc, but also at the UCLA Graduate School of Architecture and Urban Design, and Art Center College of Design, among others. Her elective courses such as The Cinematic City and The History, Theory, and Politics of Architectural Competitions examined various forms of representing architecture and the urban environment.